The populous Italian city of Naples is one of the oldest cities in the world to have had constant inhabitation. So it is somewhat ironic that its name comes from the Greek for “new city”.

The history of Naples covers some 2700 years or so. Greek people settled in the Naples areas during the Bronze Age, with the colony proving vital in allowing Greek influence on Rome culture. Naples then become an important city in the Roman Republic. After the fall of Rome, Naples held its own as the Kingdom of Naples (1282-1816). During this time, it was an important authority during the Renaissance and Enlightenment periods. Still, Naples was a hearty supporter of unification and, after a brief period in which Naples joined forces with Sicily, Italian unification took place in 1861.

During the Second World War, Naples took the brunt of bombs landing on Italian soil. During the fascist period under Bernito Mussolini, much rebuilding took the all-function, no-fuss architectural style of the time. More modern additions to the city of Naples has resulted in a unique mix of architectural styles throughout the city including many Medieval, Baroque, Renaissance, fascist-era and more modern styles.

Today, Naples is a UNESCO World Heritage Site, owing to the many historic sites therein and in the surrounds. The historic centre Naples is expansive, covering some 1,700 hectares – more than any other city in Europe.

Naples city is bordered by the coast that has allowed Naples to function as an important port town that has contributed  significantly to the economy of Naples throughout history.

However perhaps the most famous export from Naples is pizza. Whilst flatbreads had been made around the world for centuries prior, in the 1500s in Naples the word ‘pizza’ came into use. At that time, it was a street food made for the poorer of the population. In 1889, pizza’s status was elevated when pizzaiolo Raffaele Esposito made the first “Margherita” pizza, featuring tomatoes, mozzarella and basil to represent the colours of the Italian flag in honour of Queen Margherita of Savoy.

In popular culture, Naples has contributed significantly to the music, film and theatre in Italy and even globally. Many operas also come from Naples, as do the mandolin and romantic guitar.

Picture Naples, a city of close to 4 million people, wedged against the sea.

Unmistakably beautifully menacing is the large, active volcano forming the backdrop to any city scene. Its most famous explosion occurred on August 24, 79 A.D., when tons of stone, rock, and ash spurted and hurled itself into the sky, wiping out the towns of Pompei and Herculaneum. It’s estimated that about 16,000 people died, and if you want to read a first-hand account of the event, look no further than Pliny the Younger’s letter to the historian Tacitus (written some 25 years after the event). Vesuvius last exploded in 1944; many volcanologists wonder when, not if, the next eruption will occur.

Once a prosperous Roman city, just south of the city of Naples, Pompeii became the stuff of legends.

On August 24, 79 AD the city and its inhabitants were virtually buried alive by a violent eruption of the region’s resident volcano, Vesuvius.Almost perfectly preserved under a layer of volcanic rock, Pompeii with its ruins, relics and ash body casts,now presents us with a hauntingly clear image of Roman life in the 1st century. 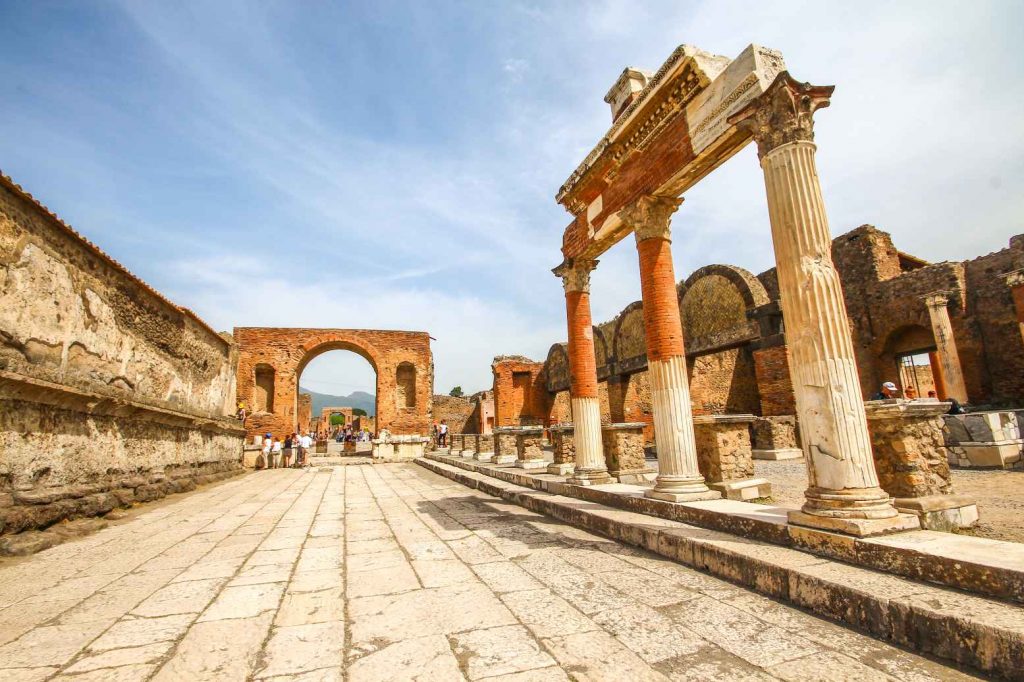 In the 9th century, this city, nestled between the sea and mountains south of Naples

was a maritime powerhouse (along with Genoa, Pisa, and Venice, they formed the Maritime Republics). This also meant that it was terribly wealthy, as Amalfi was trading extensively with North Africa and the Middle East. It’s no longer an economic force of nature, except when it comes to visitors, who come here to see, arguably, some of the most beautiful spots on the earth. It’s been on the radar of visitors since the 19th century. The air is crisp, the skies are blue, it’s almost always sunny, and the scenery is to die for.

– Ravello, a city perched on high, 3 miles from Amalfi

Blue Grotto of Capri is a cave with a very low entrance, just above sea level, set among cliffs which make the site accessible only by boat and entry accessible only to low-lying rowboats or swimmers. Inside, one can admire the play of light on the cave walls of the startlingly almost Caribbean-blue waters caused by the reflection of sunlight on the sandy bottom.

Informal surveys indicate most people are happy to have gone to the trouble of booking a boat passage to and from the port of Capri including the passage into and then out of rowboats by which to enter the cave, and the wait in the line of rowboats that often forms outside, on a sunny day of spring, summer, or fall.

A pretty island off the Bay of Naples.

Capri‘s mild weather and relative isolation have long made it a favorite retreat.

The Roman Emperor Tiberius lived here, and remains of his villa can be visited.

More recently turn-of-the-past-century Russians would winter here, other better and lesser-known actors, writers, political refugees have stayed here, too. Today, the island is regularly over-run with day-trippers pouring out of ferries or hydrofoils from Naples or from the Amalfi Coast, rubbing elbows with their fellow gawkers up and down the island’s main squares at the port and higher up the hill, occasionally venturing on admittedly delightful walks along the island’s roads, frequently waiting for a boat to go the Blue Grotto.

Capri is much more enjoyable when the last ferry has gone and the islanders come out of hiding, but this experience entails finding lodging on the island which is, in high season especially, a relatively expensive proposition to be booked well ahead.

When even a wild rock could be a masterpiece.

It means “big lighthouses” and, in this case, they are three large rocks at the southwestern end of the island.

This last is home to the blue lizard and, as far as is known, it’s the only home of this reptile.

Leave a Review for your Experience!