Recently The Florentine interviewed art diagnostician Dr Maurizio Seracini. Artviva has enjoyed a long relationship with the pioneering unraveller of art history’s biggest mysteries. Here we look at the stories and facts behind his research. 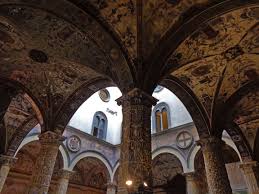 Buried behind a brick wall in Florence’s historical center, in the largest hall of the Palazzo Vecchio, is believed to lie, “the highest and highly praised work of art ever achieved by mankind.” To this day it remains concealed, a mystery yet to be brought to light, due to political and administrative restrictions on the man who seeks to reveal a long lost Leonardo Da Vinci masterpiece.

Since 1975, Maurizio Seracini, a bioengineer among his many vocational signifiers, has been working in the Salone dei 500 in Florence, Italy, on what was back then called ‘The Leonardo Project’. With permission to analyze and investigate in the grand building frequently revoked by local authorities through the decades, he set up Editech, the first ever art and architectural diagnostic company. He’s since deployed his pioneering investigative techniques on thousands of other famous artworks. 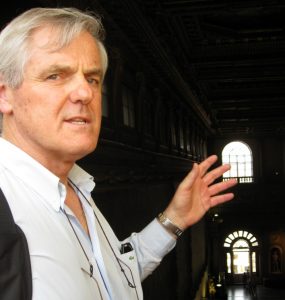 Dan Brown’s sensational best-selling ‘The Da Vinci Code’ bases the fictional plot around supposed symbolism within Leonardo Da Vinci’s paintings, in particular, The Adoration of the Magi (see below). During a commission by the Uffizi, using an infrared camera and an XYZ scanner setting, Dr. Seracini revealed vast underdrawings, sketches of faces, and even a little elephant! 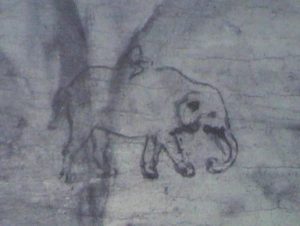 He concluded that none of the paint on the upper layers were put there by Leonardo and suggested that the original drawing was rejected due to its unconventional depiction of The Adoration, and much later painted over.

Such revelations inspired Dan Brown and even led him to include Dr Maurizio Seracini with his full real name (without ever having met him or even asking permission!) in his conspirational novel as an ‘art diagnostician’.  Given Seracini’s medical degree and original interest in bioengineering technological in the medical realm, the title seemed apt.

Seracini sees his approach as thoroughly following the spirit of Leonardo himself. A scientist and engineer as well as an artist, Leonardo Da Vinci had an insatiable curiosity and spirit for experimentation and discovery. A similar drive underlines Seracini’s continuous search for uncovering the secrets behind some of the world’s most beloved works of art.

Having founded a new Center for Interdisciplinary Science for Art, Architecture, and Archaeology (succinctly called the CISA3) at his Alma Mater the University of California San Diego, he has spearheaded research and development of new technologies allowing non or minimally invasive analysis of works of art. This can be crucial also when considering the case for restoring paintings as many museums need to do, as the actual painting they seek to restore may be hidden beneath another retouching.

In the case of The Woman Girl with the Unicorn, housed in Rome’s Borghese Gallery and attributed to Raphael, an X-ray scan was almost an embarrassment to various scholars who wrote interpretations of the symbolism of Raphael’s unicorn, a symbol of purity, godliness, and goodness.

The painting as it was found before its modern restoration is as below on the left. Her bare shoulders covered, and hands placed upon instead a wheel and holding a palm, transforming the sitter into the religious icon of St Catherine. This heavy repainting, estimated to have been done in the mid 17th century was removed during a restoration project in 1934 when it was transferred to canvas from its wooden canvas.

But it wasn’t until Seracini and his team used his radiographic technology that an even earlier painting of a little dog was revealed below in place of the unicorn. The debate is open on whether and why Raphael made the change from dog to unicorn but Seracini claims it was a change made by a hand that was not Raphael’s. 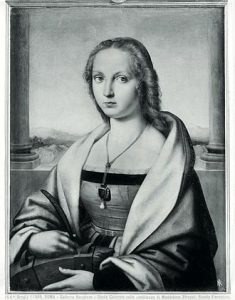 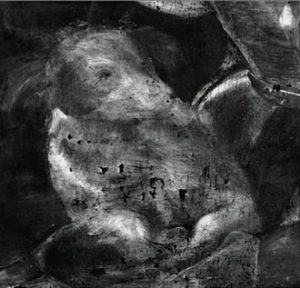 It was 1503 that both Michelangelo and Leonardo Da Vinci were commissioned to paint a wall each of the grand Salone dei 500 in Palazzo Vecchio in Florence, by Pier Soderini, who was the ‘gonfaloniere’ of Florence – an important and prestigious communal office.

Each of the masters had one of enormous walls opposite each other and were assigned a triumphant battle of Florence’s past. Michengelo began working on the Battle of Cascina while Leonardo made his sketches of the Battle of Anghiari in the Basilica di Santa Maria Novella.

However, each of the famed artists abandoned their frescos incomplete. Michelangelo was called to Rome to build the Pope’s tomb and Leonardo’s experimental nature resulted in his painting being ruined although the original underdrawings remain to be found…

‘The Battle of Anghiari’ is a painting documented by Giorgio Vasari in his comprehensive book ‘The Lives of the Most Excellent Painters, Sculptors, and Architects’  and it’s drawings are given the utmost of praises:

“A drawing held to be most excellent and masterful for its marvelous treatment of figures in flight. In it, anger, disdain, and vindictiveness are displayed no less by the horsemen than by their horses, two of which with forelegs intertwined are batting with their teeth no less fiercely than their riders…It would be impossible to express the inventiveness of Leonardo’s design for the soldiers’ uniforms, which he sketched in all their variety, or the crests of the helmets and other ornaments, not to mention the incredible skill he demonstrated in the shape and features of the horses, which Leonardo, better than any other master, created with their boldness, muscles and graceful beauty.” 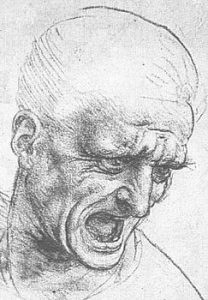 However, the painting itself has never been seen, hence is known as the lost Leonardo, and this lies in the way it was made. Not a fan of traditional fresco techniques, Leonardo – ever one to experiment and innovate – seemed to begin applying paint in a method known as ‘Encaustic painting’. This involves mixing colour pigments with heated beeswax and some tree resin and applying the mixture to the surface. Not common in the Renaissance, it is a technique that was used by Ancient Greeks in Fayum mummy portraits in Egypt.

Unfortunately, experimental as this was, it was not successful and the colours began to drip as the wax was slow to dry. He even tried to hang giant burning braziers of coal from the ceilings in an attempt to speed up the drying but most of the upper part was ruined. Despite having constructed a special and ingenious scaffolding for the work, inspired by an accordion, he never finished the painting and Vasari himself was given the task to take over. 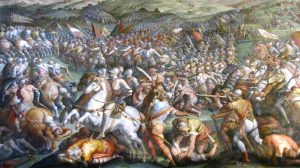 A Secret Wall in Florence

As he explains in his TED talk, thanks to enthusiasm and funding by the Guinnes family, Seracini’s team were able to begin a thorough investigation of the room itself.

And extraordinary discoveries were made.

Built in 1494, the Palazzo Vecchio had been remodeled our favourite Vasari at the request of the Grand Duke Cosimo of the Medici family. Using thermographic technology they revealed that behind the great frescos on the hall’s walls were windows and a staircase (used by the painters to paint high up).

Convinced that Vasari, who had so profusely praised Leonardo Da Vinci’s drawings of the Battle of Anghiari, would never have destroyed his predecessor’s work while carrying out his own commission in the room, Seracini realised a new brick wall had been built in front of the original wall. 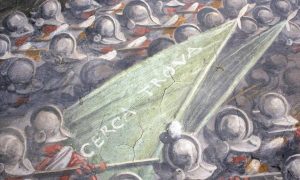 He found a 2cm cavity between Vasari’s work and the wall behind where he believes to this day that Leonardo’s famous missing work lies.

Drilling microscopic holes – a controversial move – and inserting into them a medical type probe with a camera he and his team were able to extract paint and pigment extracts which were found to match the chemical composition of that used in his work of Mona Lisa and the Last Supper. As we know, the experimental painting methods employed by Leonardo weren’t used by others, nor are found in any other paintings and so it is fairly conclusive evidence that lying sealed behind the current frescos is the long lost Leonardo. 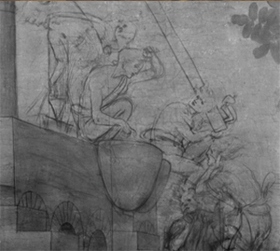 X-Ray imaging reveals original drawings of The Adoration of the Magi, offering a much different layout

One more factor which spurs on the conviction that Leonardo’s masterpiece lies behind Giorgio’s Vasari mural are the words ‘CERCA TROVA’ written near the top upon a green flag. This translates to ‘he who searches, finds’ and Dr Seracini believes this is Vasari’s reference to the hidden artwork beneath – which he himself covered up while preserving and saving it.

Indeed, this is exactly what Maurizio Seracini is and has been determined to do: investigate and search, in order to unveil and find the truth within many of art history’s momentous works. Yet, due to the controversial nature of his findings -often a little uncomfortable or embarrassing for some scholars, as well as disputes over the invasiveness of his diagnostic techniques, he has been subject to much criticism.

Alas, while currently forbidden from continuing his search in Palazzo Vecchio’s Salone dei Cinquecento we will never quite know for sure the hidden secrets behind Vasari’s painting and the extra wall.

Dr Seracini continues to live and work in Florence, often requested to examine numerous works of art of architectural structure including hundreds from the Uffizi Gallery’s vast collection.

…and You Can Join!

At Artviva we have enjoyed his presence and talks in our office in the center of Florence and continue to work with him offering our Private Tour with the Da Vinci Art Detective himself. To book a tour or for any more information on a custom experience with Dr Maurizio Seracini, the only real-life Da Vinci Code character get in touch! 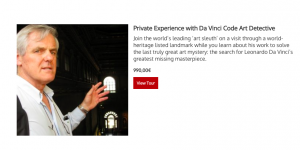 “As long as we live a life of curiosity and passion, there is a bit of Leonardo in all of us”