Visit Bologna with our wonderful curated food tour – with historical and cultural discoveries too.

Known as ‘La Grassa’ – ‘the fat city’ in reference to its indulgent cuisine and recipes, Bologna is the city of food a where you’ll discover a side to Italian food you’d never encountered.

Explore the history and more!

Bologna is also known as ‘La Dotta’ a reference to its 1000-year-old university which still flourishes and cultivates a rich academic culture today. You may visit these medieval buildings including the Palazzo of Archiginnasio where you can see an original anatomical theatre.

Visiting a pasta maker, we’ll unfold the different types of pasta and understand why ‘ragu’ the popularly misnamed ‘bolognese’ sauce cannot be eaten with spaghetti!

Taste Unique Wines of the Region

There are some awesome wines to be tried in Bologna, found only in the Emilia-Romagna region. Lambrusco is particularly unusual being a sparkling wine that is red! Yes – completely red and very bubbly, this ‘bollicino’ can take some getting used to but you’ll find everywhere from the students’ graduations to the trattoria tables.

Pignoletto, is a white wine that is special to Bologna is as delightful in taste as is its name! (Don’t worry – we’ll help you pronounce it!) It can be lightly sparkling or also still, but is perfect for an aperitivo.

Feed the eyes as well as the stomach

The beautiful city of Bologna has much to offer alongside its food. You’ll walk past the city’s antique university, the unfinished façade of the Basilica and the mysterious 7 churches (one inside each other!). We’ll unravel the seven secrets of Bologna and take a peek at the ‘mini Venice’ through a secret window.

You can read more about Bologna’s best food on our Bologna blog!

Meeting a the Piazza in front of the station we’ll head up the medieval streets of Bologna. We’ll pass the university in the world stopping for a classic Italian coffee in a bar.

Heading to a special bakery we’ll try ‘Tigelle’ a typical type of pancake/bread from the region and enjoy local hams and cheeses.

We’ll sample a typical red sparkling wine to raise our appetite for the pasta tastings at our next stop!

Learn about the different types of pasta and why the real Bolognese sauce is known as ‘Ragu’.

Walking past some of the city’s most beautiful sites we’ll learn about it’s past and stop in a pasticceria for a special Bolognese snack.

We’ll arrange the precise meeting point upon booking according to where you’re coming from but usually it will be a spot across the road in front of the main train station. Please see your ticket for details and contact us if you have any doubts.

See below a picture of the shop where we meet usually: 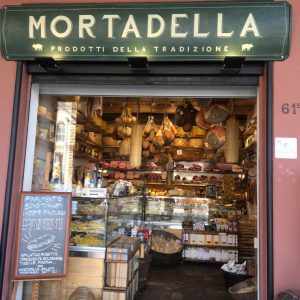 There are no reviews yet.

(per person based on a group of 6)