Carnival, also known as carnevale or mardi gras, has been celebrated in Italy since the Middle Ages. If you are fascinated by the blending of Christian and pagan practice, and if you love a good party, you’ll enjoy a trip to Italy during the celebration of this festival, which marks the start of Lent.

We’ve been running tours in the three areas where carnival celebrations are world-famous, and we have no hesitation in recommending a late winter visit to these towns and cities: Venice, Viareggio (Tuscany) and Acireale (Sicily).

Carnival lasts for a couple of weeks and culminates on Shrove Tuesday (Martedì Grasso). The origins date back to the early Middle Ages, and the celebrations mark the run up to Lent and the 40-day period when Roman Catholics abstain from eating meat.

In anticipation of this time of austerity and repentance, medieval Italians would indulge in carnival: a set of days of celebratory, cathartic debauchery. This involved traditions as varied as peasants swapping roles with aristocrats, dressing up, drinking and feasting.

If there’s one carnival in Italy that you’re likely to know about, it’s probably the one that is held in Venice.

Venetians have been holding their annual carnival since the eleventh century. They ran out of steam in the eighteenth century, but the festival was revived in 1979 and has become hugely popular with locals and visitors.

For ten days, the streets are filled with masked and costumed celebrants; live music is performed in many of the city’s stunning squares; several parades take place; and costume contests are held. The carnival is the very definition of extravaganza. 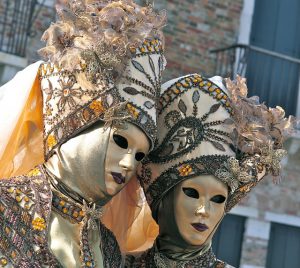 Less well known but equally impressive is the carnival that is held in the town of Viareggio on the north coast of Tuscany. With its sandy beaches, pine forests, alpine backdrop and Art Deco architecture, you couldn’t find a more magical stage for a truly magical event.

Viareggio’s unique interpretation of carnevale hinges on the art of papier-maché, which is harnessed to produce enormous allegorical floats that fill the streets of the towns in elaborate parades. Some weigh as much as 40 tonnes, and the best will be infused with an iconoclastic and maverick satirical spirit that has historically defined carnevale.

A triple cannon shot out to sea opens and closes the festivities: for the 16 days in between, visitors can expect a raucous experience, ranging from being showered with confetti and streamers and gorging on sugary treats, to fancy dress, masks, fireworks and lots to drink.

The carnival in Viareggio makes for a great excursion during a visit to the region.

If you have ever encountered the flamboyant character of the typical Sicilian, it will come as no surprise that the local approach to carnevale is spectacular. In fact in 1948 the town of Acireale’s festivities was awarded the title of ‘the most beautiful Carnival in Sicily’.

Carnevale in Acireale has a slightly different angle from those celebrated in Venice and Viareggio. These pre-Lenten celebrations were not common in Sicily until as late as the 1500s, when the local population achieved sufficient political freedom to indulge in a savage satire of its religious authorities.

Today participants are treated to dancing in the main squares and fantastical papier-maché caricatures of celebrities parading the streets. The traditional satirical depictions of the stereotypical priest and prince still delight and entertain the local population.

The Sicilian peninsula has a character that is very distinct from the rest of Italy, and this individuality is reflected in the locals’ celebration of carnevale. If you are planning to seek out a bit of winter sun this year, then we would highly recommend  that your visit to the region coincides with the carnival season.

Italy and its culture feed our passion and infuse all of our tours. If you want recommendations on local festivals and celebrations that complement the more traditional tourist attractions, please feel free to get in touch with us. Whether you’re looking to wander off the beaten path or get to grips with the major highlights, we promise to help ensure that you have an experience that you’ll remember forever.