O vanity of human powers,
how briefly lasts the crowning green of glory,
unless an age of darkness follows!
In painting Cimabue thought he held the field
but now it’s Giotto has the cry,
so that the other’s fame is dimmed.

He was born sometime around 1265 in Florence, and fought in the Battle of Campaldino (Florentine Guelphs battling it out with Aretine Ghibellines) in 1289.

In between, at around aged 9, he saw 8-year old Beatrice Portinari, and fell irredeemably and hopelessly in love (they would both go on to marriy other people, and it appears that nothing ever happened between them).

He was kicked out of Florence in 1301, and wandered the peninsula, staying in Verona (home of legendary fictional lovers Romeo and Juliet) and Sarzana before finally settling in Ravenna.

Written in terza rima (a most tricky rhyme scheme), it comprises three books: Inferno, Purgatorio, and Paradiso. Virgil is his guide through the first two books, and Beatrice takes him through Paradise.

Dante is buried in Ravenna, much to the dismay of many Florentines over the centuries.

One of Florence’s most infamous citizens.

In the 500 years or so after his death, the name of poor ol’ Machiavelli has become synonymous with unscrupulous cunning.

Yet in life, Niccolò di Bernardo dei Machiavelli (1469-1527) was quite the Renaissance man. He held illustrious positions in Florentine politics, including diplomatic and military roles. He was a historian and writer, as well a philosopher and humanist. Particularly through his writings, he established political ethics/political science as a concept and subject of study. Other Machiavelli writings perhaps surprisingly included poetry, comedies and carnival tunes.

Machiavelli worked in politics during the period in which the Medici family were in exile. These were quite turbulent times. There were constant power struggles between various city-states and the fractions there within, battles waged by Popes and upheaval attempts by the people. All this whilst powers from surrounding countries including Switzerland, France and Spain regularly tried to take over the rule of Italian lands.

For three years in the first decade of the 1500s, Machiavelli was in charge of Florence’s militia. Due to his lack of trust in mercenaries, he utilised local citizens whose interest in the outcome of battles were more pure. For the most part, these tactics bought about great success for Machiavelli.

Upon the return of the Medici to power, Machiavelli was not only relieved of his position but also imprisoned and tortured for accusations of conspiracy against the family (which he denied) before being released.

He spent the remainder of his life on his estate in a small Tuscan village just outside of Florence, where he passed the time studying and writing. He penned various plays that were received with great success, but his draw to politics and power was too strong thus he remained in constant contact with political figures.

Yet with no political or public role to play, Machiavelli was free to write The Prince, a tome on how rulers may treat their subjects and enemies ruthlessly in order to maintain power, permitting acts that most would see as quite unethical, should it serve the political ambitions of the ruler.

It is from this that the concept of being “Machiavellian” arose – not to be like Machiavelli but to subscribe to the philosophies outlined in The Prince. A discourse on asserting and maintaining power, The Prince seems to justify and indeed endorse immoral acts – including murder and deceit – if they serve to maintain one’s power. It was eventually banned by the church and looked down upon by Machiavelli’s fellow humanists. However, there are some schools of thought that suggest The Prince was written tongue-in-cheek.

Having died at the age of 58, Machiavelli is buried in Florence’s Santa Croce Basilica in Piazza Santa Croce. 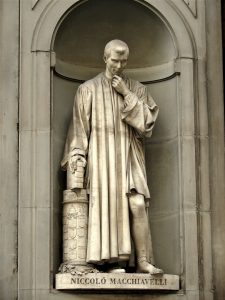 Leave a Review for your Experience!